My Interest in Coins and Banknotes started at twenty years of age and working as a labourer on a Cane Farm on a fixed income with the birth of our first child. After siting a Pre-decimal Coin and Banknote Collection laid out in a display case was impressed to the point that my enthusiasm drove me to attempt the same feat.

In 1980 I decided that I would turn my hobby into a business not knowing till later in life that I was one of the first ten Coin Dealers to open a bricks and mortar business in Australia. With the help of a leading Coin Dealer from Adelaide who produced the first known Coin Catalogue in Australia that I have the first two Volumes of.

We opened in Cairns Far North Queensland with a population of 20,000.00 at the time. It did not take long for me to realise that we would not survive long in business just by trading in Coins and Banknotes alone it was at that time I decided to broaden our horizon to trading in precious metals. This decision was based on knowing that there were several Gold Fields within travelling distance to our shop.

In 1982 after being offered several Hawaiian Tourist Dollars over the counter I thought it would be great as an Australian and Cairns City Souvenir. We took out the Copy Rights over the Cairns, Townsville and Rockhampton Tourist Dollars this venture spread nationwide with many cities producing their own. Receiving a Certificate of Registration of a Design on the 4th March 1982 for the Cairns Tourist Dollar

On The 4th Of March 1982 Bradford Coins and Stamps Were Recognised as The Designer of The Cairns Tourist Dollar. 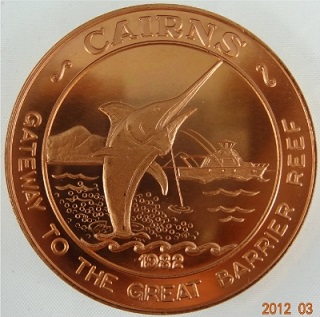 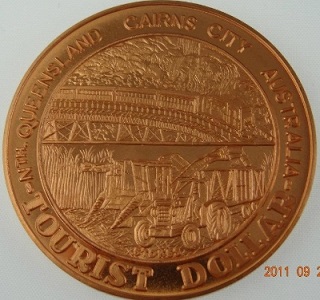 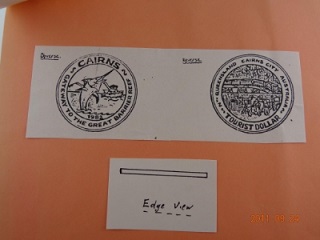 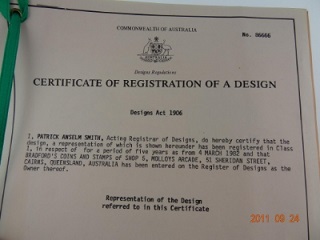 Certificate Of Registration Of A Design